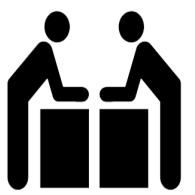 Sandy Township, PA – Route 255, from its intersection with Division Street all the way to The Commons Plaza in DuBois, was shut down for about two hours on Friday after a high-speed chase caused a crash.

It started around 11:30 Friday morning when State Police in DuBois saw a gold GMC Envoy pulling a U-Haul trailer going 78 mph in a 70 mph zone on Interstate 80.

Police attempted to pull the vehicle over, but the driver, Michael David Myers from DuBois, fled at a high rate of speed and used exit 101 to come into the DuBois area.

The vehicle sped down Route 255 toward DuBois, then turned onto Midway Drive and fled through the Lowe’s parking lot, then back onto Route 255.

Myers struck a curb and lost the U-Haul trailer.

He then lost control at the intersection with Industrial Drive, striking a minivan with two adults and three children.

Myers was then captured and taken into custody.

Police do not specifically say in the police report why Myers might have fled instead of pulling over, but DUI is listed under the “nature of incident” segment of the report.

No injuries were reported by anyone involved.

I'd say the first article i posted is the reasoning for him running...

Good ol Michael Myers. He already did time for robbing Unimart many years ago. Apparently didn't learn his lesson.

According to the complaint, around 2:00 a.m. on February 21, Tanya Witherite and Michael D. Myers were involved in a pursuit with Pennsylvania State Police, troopers and were caught and taken to a hospital for treatment following the crash that ended the pursuit. Police then learned that Witherite and Myers were staying at the Super 9 Motel.

Brookville Borough Police were dispatched to the Super 8 Motel around 1:44 p.m. on February 21 for a report of controlled substances found inside a room, the complaint notes.

Police then met with a manager at the business who reported the room had been rented by Tanya Witherite and a man who used his credit card to pay for it and provided police with a copy of the room reservation sheet that Witherite had signed.

According to the complaint, Witherite had contacted the hotel, reported that she had been in an accident, and asked that her property inside the room be packaged up with the intent of a family member picking it up.

The employees then took police to the hotel room in question.

The complaint notes that as Witherite had asked a third party to enter the hotel room to pack her things, she gave up her expectation of privacy from law enforcement.

In the room, police observed numerous hypodermic syringes without caps, and a drawer that was open had white, wax baggies, often called stamp bags, with Q-tips and syringes with blood on them, as commonly used for injection of controlled substances, the complaint indicates.

The complaint states that the large number of unused and wrapped stamp baggies is considered evidence of the trafficking of controlled substances, namely heroin and/or fentanyl.

According to the complaint, police also found a bag containing approximately one-half gram of methamphetamine.

The following charges were filed against Witherite and Myers through Magisterial District Judge Gregory M Bazylak’s office on March 30:

Preliminary hearings are scheduled for 11:00 a.m. on May 13, with Judge Bazylak presiding.

Court documents indicate Myers was held for court on February 25, on third-degree felony flight to avoid apprehension and misdemeanor use/possession of drug paraphernalia charges in relation to an incident in Winslow Township on December 12, 2020. That case is continuing to make its way through the common pleas court system.

Myers is also facing a preliminary hearing in Clearfield County at 9:45 a.m. on May 7, on Fleeing, Receiving Stolen Property, DUI, Reckless Endangerment, and related charges from an incident on February 26, in Sandy Township.

Hopefully they fast track this case.  This guy has already had 3 incidents before its even got to court the first time.